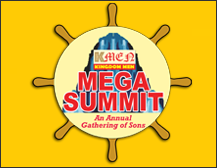 Christopher Kolade, CON, is one of our nation’s very few consensuses, he is a brand that exemplifies real manhood – integrity, courage and strength. He is the quintessential leader and maker of leaders. He is Chancellor of McPherson University in Ogun State, an initiative of the Foursquare Gospel Church, Nigeria, and Chairman of Kingdom Men Global Network’s Board of Trustees.

Dr Kolade, 87, rose to the pinnacle of his broadcasting career, becoming the Director General of the government-owned Nigeria Broadcasting Corporation (NBC) now FRCN eons ago and, on retirement at a mere 45, moved to the corporate world to repeat the same feat. He served Cadbury Nigeria Plc first as Administration Director, becoming its Chief Executive and later Board Chairman. He was to take the world of diplomacy by storm soon when he was appointed Nigeria’s High Commissioner to the United Kingdom. His excellent performance in that assignment is the subject of a book, He Made the Difference, written by a UK-based Nigerian journalist.

All through his professional, public, business and diplomatic life, he exemplified godliness, demonstrating that integrity and character are not optional extras but essential manifestations of true Christian living. And he was keen to pass it on.

This he did and continues to do through teaching and preaching from the podium and the pulpit. He teaches at various forums and through organisations such as Integrity Organisation Ltd and The Convention on Business Integrity, both of which he chaired; and Managing Business for Christ (MBFC), a ministry for bringing business people and practices to Jesus Christ.  He also teaches at Lagos Business School and at School of Media & Communication – both schools of Pan-African University, Lagos where he recently retired as Pro-Chancellor and Chairman, Governing Council.

When he left Cadbury years ago, all he wanted to be was a musician for God, having learnt to play that magnificent instrument known as organ with no human teacher and no tuition fees. He served as organist and choirmaster of St. Peter’s Church, Faji, Lagos, for many years. He received the medal of the Order of St. Augustine from the Archbishop of Canterbury in 1981, and is a Lay Canon of the Cathedral of the Holy Spirit in the Diocese of Guildford in the UK.